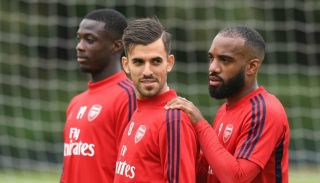 Former Arsenal star Paul Merson feels that Nicolas Pepe has the prerequisites to become successful at the club.

The Ivorian winger became a highly sought-after player thanks to his performances for Lille last season. Pepe netted 23 goals and delivered 13 assists in 41 appearances across all competitions.

SEE MORE: ‘This is not a kindergarten place’ – Gary Neville warns Arsenal over crucial team selection vs Liverpool

Arsenal managed to sign him for a club-record transfer fee of £72 million as reported by Sky Sports. Pepe has featured in both of the Gunners’ Premier League matches albeit as a substitute.

Merson feels that the 24-year-old can be successful at the Emirates. In his column for the Daily Star, the former Arsenal man wrote: “I know Pepe has yet to prove himself here but I think he’s going to be a big success. He looks a really good player. You don’t pay the kind of money Arsenal did for him if you’re not 100 per cent sure he is going to be a top player. It’s very rare players who cost that much end up being a dud.”

Pepe is undoubtedly a player Arsenal will heavily rely on in their quest to reach the Champions League next season. The Ivorian can be a massive threat on the right-wing thanks to his pace, dribbling and shooting ability.