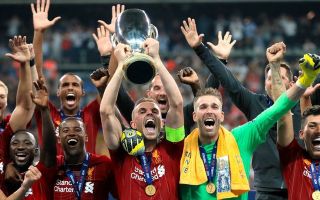 Liverpool captain Jordan Henderson feels that his team must be at their best if they are to attain a desirable result against Arsenal today.

The Reds are currently at the top of the Premier League table after winning against Norwich City and Southampton. Today, they face their first big challenge of the league against Arsenal at Anfield. The last two matches between the two sides at Anfield saw Liverpool winning 5-1 and 4-0.

SEE MORE: “It’s our identity as a team”- Jurgen Klopp reveals what has impressed him about Liverpool’s start to the season

However, things could well be different for the Reds this time as the Gunners have added the likes of Nicolas Pepe, Dani Ceballos and David Luiz to their squad while the error-prone Shkodran Mustafi will not be playing today.

Henderson feels that his team will have to play at their highest level if they are to achieve a good result today. Speaking to Liverpool’s official website, the Liverpool star said: “When you face Arsenal you know that your own commitment and concentration has to be at its maximum for the entire game. If you drop even half-a-per-cent they will punish you.

“They’ve started the season strongly and we know nothing less than our absolute maximum will be required tonight if we’re to get the result we want.”

Liverpool and Arsenal are the only teams who have won all of their league games so far and both sides will be hoping to register their third successive win. Today’s match will certainly not be as one-sided as the other two Reds-Gunners meetings at Anfield.

Provided Liverpool win, they’ll extend their Premier League winning streak to 12 matches while a win for Arsenal will mark their first win at Anfield since 2012.