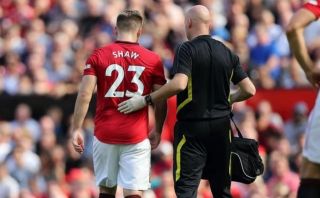 Manchester United manager Ole Gunnar Solskjaer has provided an update on Anthony Martial and Luke Shaw after both provided injury concerns in the 2-1 home defeat to Crystal Palace.

Shaw went off in the loss to Palace, with Ashley Young replacing him, and Solskjaer has how confirmed the England international had a hamstring problem.

However, as quoted by the Daily Express, the Norwegian tactician said he hoped it didn’t seem too serious and that the left-back could return to action for the club’s next game against Southampton.

“We’ll do the scans tomorrow but he felt something in his hamstring,” he said.

“Hopefully, it won’t be too bad and I hope he is going to be back for Southampton [next Saturday].”

Solskjaer also responded to questions about Martial, who seemed in some discomfort close to the end of the game, though he could not be withdrawn as Man Utd had already made all three substitutions by that point.

The United manager was a little more vague on the Frenchman’s situation, but sounded generally hopeful that both players could be in action again soon despite their knocks in Saturday’s match.

“We’ll have to wait and see [about Martial],” he said.

“Hopefully they won’t be too bad and maybe we can have them training during the week.”