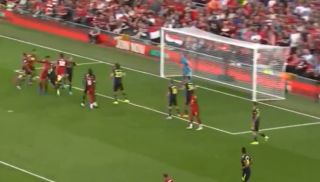 Liverpool have taken a 1-0 lead against Arsenal in their Premier League clash at Anfield thanks to a thumping header by defender Joel Matip.

See below as the Reds centre-back rises to head in a corner from Trent Alexander-Arnold to give the home side the advantage as we head towards half time.

Arsenal have had their chances at Anfield today, but Nicolas Pepe should have done better with one opportunity in particular, and it’s now cost them.

Matip will be thrilled to be coming up with the goods again for LFC, having also scored in the Community Shield clash with Manchester City this season.