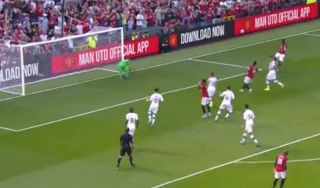 Manchester United striker Marcus Rashford was back on penalties today against Crystal Palace, but smashed his effort against the post.

See the quite extraordinary scenes below as the England international steps up with the hope of doing better than Paul Pogba did with his shot that was saved against Wolves on Monday.

Unfortunately, Rashford fails to even hit the target as his penalty clatters the woodwork, keeping the score at 1-0 to Crystal Palace.

Rashford scored his penalty against Chelsea on the first day of the season, but will there now be a debate again over who should be United’s first choice penalty taker?