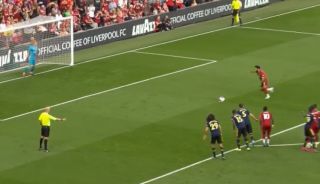 Liverpool star Mohamed Salah has scored from the penalty spot to make it 2-0 against Arsenal in their Premier League clash today.

The Egypt international made no mistake with a superbly struck effort for Liverpool to double their lead at the start of the second half.

The penalty was awarded to the Reds after a needless tug of the shirt in the area by Arsenal defender David Luiz, who became known for the odd error like this during his time at previous club Chelsea.

Arsenal fans won’t be too pleased, but Salah has done the job again for Liverpool, who are surely heading for all three points now.