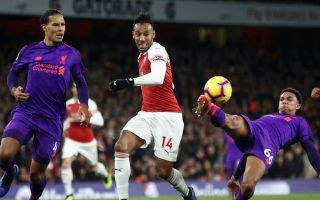 Aubameyang and Lacazette scored a combined 50 goals last season and have already scored three this year (Aubameyang -2, Lacazette- 1). The Gunners will heavily rely on these two for goals as they aim for Champions League football next season.

Van Dijk praised both players while talking to the Times. As quoted by Express, the Dutchman said: “They’re fantastic finishers, both of them. They’ve got pace, but overall Arsenal are just a great team.”

Today, van Dijk will have the task of keeping Aubameyang and Lacazette at bay. Last season, the duo were far from posing much of a threat to Liverpool at Anfield as they were thrashed 5-1 courtesy of a Roberto Firmino hat-trick.

However, this time Arsenal are bound to trouble the Reds as they have added some really good players to their squads. Aubameyang and Lacazette will be hoping to try and find the net. However, the Gunners defenders will certainly have a tough time taking on the likes of Salah, Mane and Firmino.