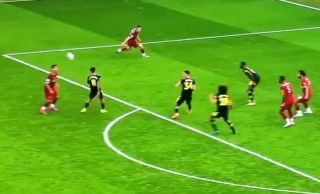 Liverpool forward Roberto Firmino pulled off a sensational piece of skill against Arsenal this evening, as the Brazilian seemingly tried to score one of the best goals of the season.

With the score at 1-0, Firmino tried to double the Reds’ lead in spectacular fashion just before half time, as he flicked the ball up to himself, and over the head of Dani Ceballos in the process, before firing a volley at goal, which was unfortunately blocked.

My days Bobby that was filth ? amd from a manutd fan nonetheless #LIVARS #Firmino pic.twitter.com/utV778D1ck

It Firmino had scored that, we wouldn’t have stopped talking about it for months, and neither would have these fans by the sounds of it!

That Firmino flick was pure filth??

That was utter filth from Firmino ?

Bruh how do you even explain that piece of skill from Firmino where he sat the ball up like it was nothing ?? pure filth

That skill from Firmino was filth by the way ?