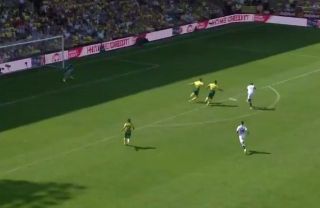 Tammy Abraham was in fine form on Saturday as he helped himself to a brace in Chelsea’s clash with Norwich City at Carrow Road.

The 21-year-old opened the scoring after just three minutes in a thrilling start to the encounter, with Mason Mount restoring Chelsea’s lead only for them to be pegged back again after the half hour mark.

SEE MORE: ‘What a beautiful scene’ – These Chelsea fans loved what Abraham did after goal vs Norwich

Frank Lampard will be hoping his side learn their lessons and protect their lead a little better after the break, with Abraham producing a brilliant solo goal, as seen in the video below.

From the close control to create space for the shot and the finish itself, the youngster is looking in confident mood and it just goes to show what a goal can do for a striker.

He’ll hope that proves to be the winning goal as Chelsea look to secure their first win of the Premier League season, but based on the first half, it certainly won’t be easy given Norwich’s threat.

Abraham at the double!

The Chelsea forward grabs his second of the game, has he scored the winner? pic.twitter.com/EYwjxPNdUX