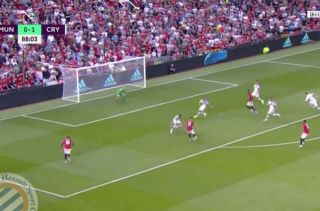 Daniel James looked as if he was going to be Man United’s saviour this afternoon, as the Welshman bagged a late equaliser to seemingly save the Red Devils’ blushes vs Crystal Palace.

United, who missed a penalty earlier in the match, finally found the back of the net with just seconds of normal time remaining, as James applied the finishing touch to a well-worked team move.

Daniel James just scored this goal for Manchester United. This is absolutely fantastic from him. Great goal. pic.twitter.com/NOZqWGHAkJ

Some quick passing on the edge of Palace’s box saw James given the ball just inside the area, with the winger then curling the ball home to draw United level.

United then conceded another just minutes later after Patrick Van Aanholt squeezed his shot in under David De Gea to win the game for the Eagles.