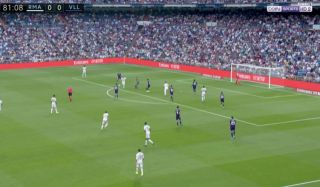 Karim Benzema looked as if he was to be Real Madrid’s saviour today, as the Frenchman bagged a late goal to hand Los Blancos a 1-0 lead over Real Valladolid at the Bernabeu.

With just eight minutes of normal time remaining, the Frenchman finally managed to break the deadlock, and what a way to do it!

Most underrated number 9 in europe. What a player. Don Karim Benzema. pic.twitter.com/r3OMkEwx06

After being given the ball by Raphael Varane with his back to goal, Benzema turned and shot all in one movement, as he somehow found the back of the net to open the scoring for Zidane’s side.

However, unluckily for Real, they were then pegged back by Valladolid following a goal from Sergi Guardiola.