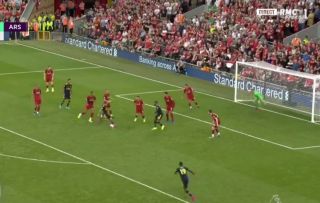 Lucas Torreira gave Arsenal fans something to smile about today, as he bagged a late consolation for the north London side in their clash against Liverpool.

The Reds were three goals to good thanks to strikes from Matip and Salah (x2), however this lead was cut to two late on in the match following a tidy finish from Torreira.

After making some space for himself in the box, the Uruguayan managed to get his shot away under pressure, as he slotted the ball past Adrian in the process.

Surely they can’t come back from here…