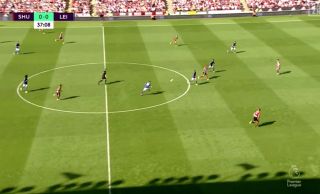 Jamie Vardy was on hand to open the scoring for Leicester in their clash against Sheffield United this afternoon, as the Englishman bagged his first league goal of the season.

With the score sat at 0-0, the Foxes finally broke the deadlock towards the end of the first half, after Vardy finished well following a truly world class pass from James Maddison.

The Independent had linked Man United with a move for Maddison in the summer, and given the quality of this assist, we can see why!

It was a brilliant assist from Maddison, who’s showing exactly why some fans are calling for him to become a part of Gareth Southgate’s England side this season…