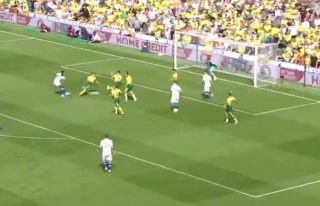 Chelsea found a breakthrough against Norwich City after just three minutes on Saturday with Tammy Abraham finding the back of the net.

The Blues were going in search of their first win of the Premier League season having picked up just a point from their opening two games.

SEE MORE: Confirmed Chelsea XI vs Norwich: Injury blow for Blues as these fans not impressed with key Lampard decision

They didn’t have to wait long at Carrow Road to take the lead, as after some quality build-up play involving Christian Pulisic and Cesar Azpilicueta down the right side, the ball found its way into the box for Abraham.

As seen in the video below, the Chelsea striker showed excellent composure and a prolific touch to find the back of the net.

However, Chelsea’s lead was short-lived as Norwich hit back just minutes later to level the scores as Todd Cantwell applied the finishing touch to a good move from the hosts.

Nevertheless, it was a moment to remember for Abraham as he bagged his first ever Chelsea goal and he’ll hope that there will be plenty more to come.

Nice pass from Barkley, great move by Pulisic, sweet cross from Azpi and a magnificient finish by TAMMY ABRAHAM