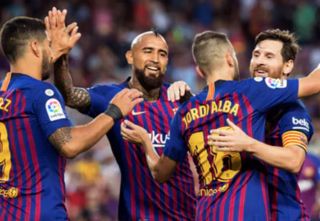 Barcelona have been handed a big worry ahead of their clash against Real Betis on Sunday, after it was reported that Lionel Messi didn’t take part in first team training today.

Ernesto Valverde’s side take on Betis at the Nou Camp tomorrow, with the Spanish giants looking to pick up their first win of the season following the opening day defeat they suffered against Athletic Bilbao last week

Barca succumbed to their first league loss of the 2019/20 season last Friday, with a fine goal from Aritz Aduriz proving to be the difference between them and Bilbao at the San Mames.

The Blaugrana are going to need all their best players fit and ready if they’re to beat Betis tomorrow, however following recent news, it seems like the club are going to have to play the match without the help of Messi.

As per Sport, the Argentine didn’t take part in the club’s first team training session this afternoon, with the forward doing gym work instead as he looks to finalise his return from injury.

AS also noted on Twitter that Messi was ‘almost certain’ to miss the game after sitting out training.

This news will come as a big blow for Barca, who would’ve been hoping to have their talisman available for tomorrow’s game against their Andalusian opponents.

Will Barca still manage to come away from tomorrow’s game with all three points amidst Messi’s absence? Looks like we’ll find out on Sunday night…