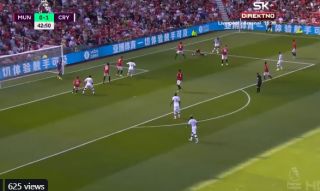 Watch below as the Ivory Coast international beats Young over and over again on the edge of the box before getting his cross in.

Young had to come on for Man Utd as Luke Shaw went off injured earlier in the first half, during which Palace also took the lead through Jordan Ayew.

So far, not an afternoon MUFC fans will be enjoying, and Zaha seems determined to make it even worse for his old club.