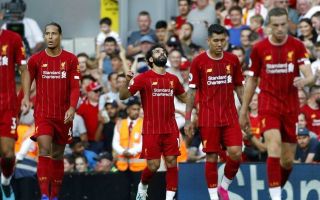 The Reds finally put in the kind of performance that we were used to seeing last season as they comprehensively beat the Gunners 3-1.

Joel Matip opened the scoring for Liverpool before half-time by heading in from Trent Alexander-Arnold’s corner. In the second half, it was the Mohamed Salah show for the Merseysiders as the Egyptian netted twice in 9 minutes to put his team 3-0 up. Arsenal got a late consolation goal thanks to Lucas Torreira who scored who his third goal for the club.

It was Liverpool’s 5th successive win against Arsenal at Anfield as they reached top spot in the Premier League table.

When asked if he was pleased with his team’s performance, Henderson told Liverpool’s official website: “Yes, of course. Another three points against a good side, a good performance – so, overall, delighted with the game.

“They started really well and won both their games so we knew it would be difficult. But we knew if we did the right things, played to our strengths, defended really well and were clinical in front of goal, then we’d hurt them. We managed to do that, so overall it was a really good performance. If we want to be really critical, we’re disappointed with the [Arsenal] goal – I should have cleared it on the edge of the box. But we’ve got to be delighted with the three points, it’s tough in the Premier League. [It was] another great performance.”

With their third straight league win, Liverpool have extended their Premier League winning run to 12 matches. Jurgen Klopp will certainly be pleased by the way his team played yesterday and will be hoping to see more performances like this as the season progresses.

Liverpool next play Burnley at Turf Moor on Saturday. The Clarets play their third Premier League match against Wolves today.