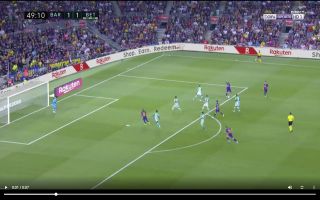 Antoine Griezmann seems to have found his feet for Barcelona, the Frenchman has scored his second goal for the side just minutes after his first.

Just five minutes into the second-half of tonight’s La Liga clash between Barcelona and Real Betis, marquee signing Antoine Griezmann has fired the Catalan giants into the lead with a stunning strike.

Griezmann picked up the ball the corner of the box after a pass from Sergi Roberto, the prolific attacker proved his worth by curling the ball into the back of the net with a magnificent strike.

Griezmann showed that Barcelona can get by without Luis Suarez and Lionel Messi by coming up clutch to score this equaliser before the first-half finished.

Check out Griezmann’s second goal of the night below:

Griezmann looks like he’s on fire in front of goal tonight.