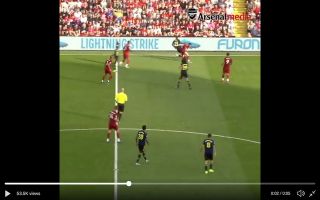 Nicolas Pepe proved that he is a dangerous attacker with some glimpses of quality against Liverpool yesterday, the Arsenal ace pulled off this superb skill.

24-year-old Nicolas Pepe showed that he’s taking no prisoners after his marquee move to the Premier League, the attacker dazzled Liverpool superstar Andy Robertson with this impressive piece of skill.

Pepe picked up the ball on the halfway line and managed to fool Robertson with a sharp turn. The forward certainly looks like an exciting player.

Pepe became the club’s record signing this summer when he joined from Ligue 1 outfit Lille, according to BBC Sport the Ivorian was bought for a mouthwatering £72m.

Check out the impressive piece of skill below:

It’s mad how Nicolas Pépé ain’t even fully fit and he sent “Best left back itw” Robertson for a hotdog each time they went 1v1 during the game. Imagine what a fully fit Pépé could do

Painful defeat. But what on earth was this filth from Pepé?? pic.twitter.com/fFlcbqVR43

Pepe showed some glimpses of quality yesterday, but it wasn’t enough for the Gunners to prove themselves as a worthy match to Jurgen Klopp’s mighty Reds.

Unai Emery’s side were comfortably beaten 3-1.