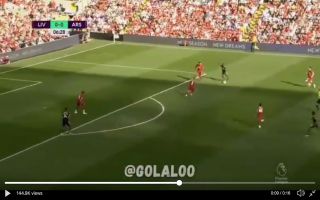 Some Liverpool fans were furious with the claims that Arsenal superstar Nicolas Pepe dribbled past stalwart Virgil Van Dijk, here’s how they reacted.

The so-called dribbled ended an insane run by Van Dijk in which no players managed to dribble past the Dutchman.

Liverpool fans weren’t ready to give up the centre-back’s impressive record just yet and have since uploaded a clip of the incident – whilst also describing how it shouldn’t be classified as a successful dribble.

Take a look at the video of the moment below:

This is the 'dribbled past' moment rivals fans are so happy about lmao. Van Dijk comfortably has him under control, doesn't commit and waits for Pepe to make a mistake which he does. pic.twitter.com/dF3sLg3Vxv

Check out some reaction to the incident:

Took Virg a few minutes to let the little one play, then put him safely in his pockets for the rest of the day..

Pepe was so happy going past Van Dijk that he left the ball behind ?

Shades of Lukaku with that ball control ?? #Pepe

That it? I wouldn’t call it being passed as VVD caught up to him. Really pathetic.

Funniest part about that, he tackled himself ?

How is that dribbled past unless pepe jus did it for the sake of winning a 30m sprint vs vvd. No end product nor did pepe managed to get himself into a scoring position. Vvd comfortably caught up n Pepe eventually lost the ball. Moment of danger only lasted 1/2 a second.

Van Dijk wasn’t even in 3rd gear when he recovered the ground. Rarely needs to even get into 2nd gear

@kingjakecp here is Pepe dribbling past VVD. Not even 2 seconds later big virg is back in front and in control ?

Rest and stop celebrating dribbles that leads to nothing.

I think it’s fair to say that the entire situation has been blown out of proportion, Pepe seemed to run past Van Dijk which is a bit different to him actually dribbling past the Dutchman.

We can’t believe how much it’s rattled both sets of fans.