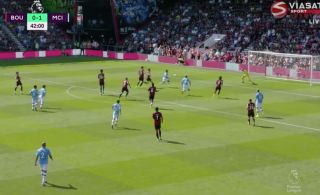 Raheem Sterling managed to keep up his impressive start to the season this afternoon, as he finished off a well-worked team goal for Man City vs Bournemouth.

Having already been 1-0 up thanks to a goal from Sergio Aguero, City made it 2-0 just before half time, as Sterling added to his goal tally.

As City worked the ball around the pitch, the move came to an end with David Silva, who put Sterling through on goal, with the forward applying the finish to what was City’s second great team goal of the match.

Brilliant to watch, this.