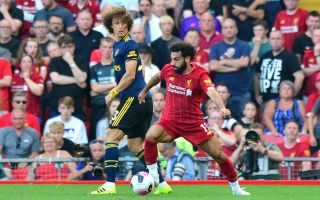 Pundit Garth Crooks has questioned why Arsenal manager Unai Emery kept David Luiz on the pitch against Liverpool as he suffered a disastrous game.

The Brazil international made individual errors for both Mohamed Salah goals, and Crooks can’t understand why Emery did not replace the struggling summer signing with Calum Chambers or Sead Kolasinac.

“Poor David Luiz had one of his days. He does have them from time to time but this one was a howler. Salah skipped around Luiz for his second goal like he didn’t exist,” Crooks wrote on BBC Sport.

“Under normal circumstances Luiz would have taken Salah out but the Brazil international had already been booked. Which begs the question, why didn’t Unai Emery take him off and replace him with Sead Kolasinac or Calum Chambers? At 3-0 the game is over.”

That seems a fair point, with Luiz on a yellow card and seemingly unwilling to risk putting in stronger challenges by the time Salah put Arsenal to the sword in the second half.

Liverpool ended up winning 3-1, despite Arsenal actually starting reasonably well and arguably still in the game at 1-0 down.

As it is, however, Emery’s poor decision-making on Luiz continued the Gunners’ dire record away to the rest of the big six.

It’s now over four years since the club won on the road to a big six rival, when they beat Manchester City 2-0 at the Etihad Stadium in the 2014/15 season.