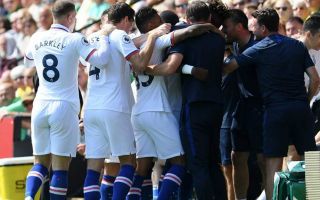 BBC Sport pundit Garth Crooks has hailed the surprise performance of Mateo Kovacic during Chelsea’s win over Norwich City at the weekend.

The Croatia international didn’t make much of an impression with the Blues last season during a year-long loan spell from Real Madrid, though he ended up making his move permanent this summer.

MORE: Chelsea could be willing to let Blues flop leave on loan as ace linked with move back to former club

And it now seems like Kovacic may finally be settling in at Chelsea, with Crooks pleasantly surprised by the leadership and quality he showed in the absence of N’Golo Kante against Norwich.

Kovacic helped Frank Lampard pick up his first win as CFC manager as they won 3-2 at Carrow Road, and Crooks thinks the 25-year-old’s performance could be a real discovery for Lampard.

“Since the departures of Didier Drogba, Michael Ballack, John Terry and Frank Lampard, Chelsea have lacked leadership on the pitch,” Crooks wrote on BBC Sport.

“The arrival of Mateo Kovacic at Stamford Bridge didn’t convince me that anything had changed until his performance against Norwich. In the absence of N’Golo Kante, the Croatia international looked immense. I knew he could tackle, compete and was full of enthusiasm but I didn’t think he could play.

“Every time I watch him at Stamford Bridge, he plays the ball everywhere apart from where it should have gone. His performance against Norwich proved he is much better than that. His manger Lampard may have discovered a player here.”

Chelsea fans will certainly be hoping Kovacic can continue to improve as it would be a welcome boost for the club as they served a transfer ban over the summer and have to make do with the players they have.