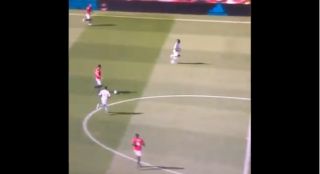 Manchester United new-boy Harry Maguire didn’t have the most convincing game against Crystal Palace this weekend as Ole Gunnar Solskjaer’s side suffered their first defeat of the 2019/20 season.

Fans will have expected better from the England international, who wasn’t really alert to the danger when Jordan Ayew raced through to score the opening goal.

Maguire runs like he’s answering the phone whilst wearing a towel pic.twitter.com/QXdpmP54uY

As well as that, Maguire didn’t look as comfortable on the ball as he’s got the reputation for being, with the video above doing the rounds on Twitter today as fans mock the former Leicester City man.

The 26-year-old can be seen trying to bring the ball out from the back, but appears worryingly clumsy on the ball before giving it away in a dangerous area.

Is this a bit harsh from a player still settling in at a new club, or is Maguire being shown up as one of the most over-hyped and over-priced centre-backs in Europe?

What £80 million buys you in this day and age. pic.twitter.com/liWOce5ll9

BuT mAgUiRe Is BeTtEr ThAn ViRgIl VaN DiJk ????? you spent £80m on a BTEC Mustafi https://t.co/gFS1mOLLGp

This myth of Maguire being good on the ball has to end. He’s a classic Brexit center back, the championship is full of them and that’s what united paid 80M for. https://t.co/2VzG1nUg9W

There are players in the Northamptonshire Sunday Combination Veterens League that look less awkward running forward with the ball than Maguire does here. What is the matter with him? https://t.co/AHomJAJWJZ

"Maguire is the best defender in the league with the ball at his feet" – Robbo
Pundits watch whatever they wanna watch for their agendas https://t.co/gpkSBQlE3K