One Manchester United fan took criticism of Ole Gunnar Solskjaer too far yesterday as he tweeted about the Norwegian tactician’s poor recent record at the club.

See below as ‘Mike’ claims Solskjaer has an identical record in his last 15 games as the Man Utd team did in the 15 games following the tragic Munich disaster of 1958.

23 people died on board the plane that had problems taking off from Munich airport, with United tragically losing a large chunk of their playing squad.

Fans remember the ‘Busby Babes’ to this day, but this so-called supporter below is now getting plenty of justified criticism for comparing Solskjaer’s impact at Old Trafford to that of half the team dying… 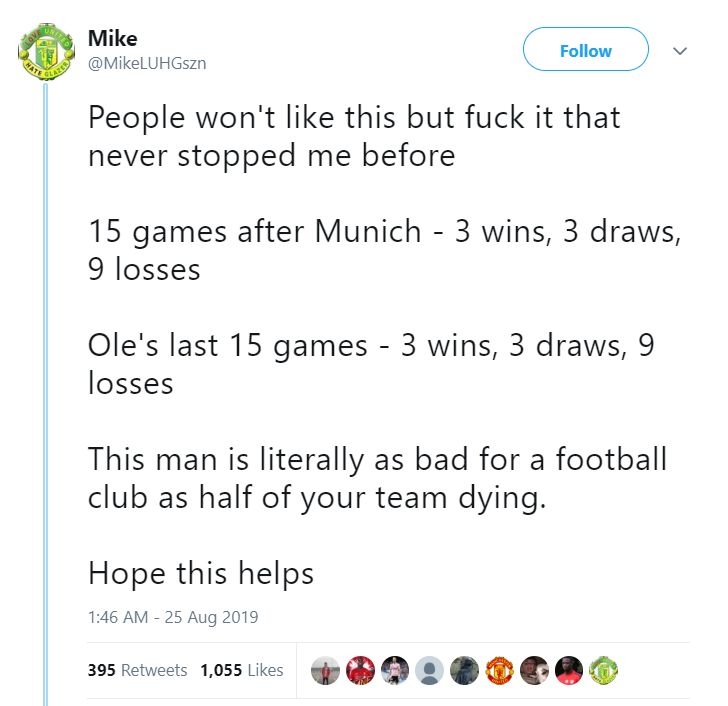 Whatever criticisms fans may have of Solskjaer’s reign so far, it’s not a good look at all to use such a tragic moment from the club’s history for petty point-scoring on Twitter.

Thankfully, most of the MUFC fans commenting on the tweet have been heavily critical…

Resorting to writing about the dead because we didn't score 2 penalties. Have a serious look at yourself Mike. This is putrid. Consider this reported.

Shocking tweet tbf.
I get you're frustrated, we all are, but this is just wrong man.

Who in their right mind likes this,bang out of order tweet

Whoever liked this should hand their head in shame.

That’s a shocking statement from a so called utd fan !! You should be ashamed

I despair for what our support has become. What an appalling comment.

this troll using the most tragic situation in this club's history for his propaganda and gain some attention and yet some fans are shamelessly euphoric about it.