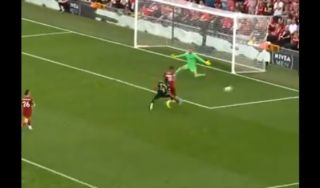 Liverpool defender Joel Matip showed his world class ability as he somehow got back to prevent a golden chance for Arsenal striker Pierre-Emerick Aubameyang at the weekend.

See the video below shared from LFC’s official Twitter account, with Matip showing great pace to deny what looked a huge opportunity for Aubameyang as he was put clean through on goal.

Unsurprisingly, loads of Reds fans are absolutely loving this from the Cameroonian, and some want him given a lifetime contract for his efforts.

Sort out his new contract will ya