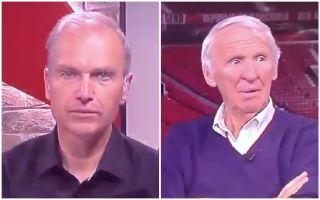 With frustration towards the Glazers ever growing among Man Utd supporters, this fan couldn’t quite keep it under control on MUTV on Monday night.

As noted by the Evening Standard, the displeasure of some fans towards their owners was displayed in the opening game of the season against Chelsea at Old Trafford.

That has continued on social media since as they evidently have significant issues with the way in which the club is being run, but there are ways to get those concerns and frustrations across.

For this fan, he didn’t manage to keep his opinion clean as he was quickly cut off after delivering an expletive on the Glazers by insisting that the club “need to get the f****** Glazers out” on live TV while speaking on MUTV.

Paddy Crerand was left stunned before the host had to apologise for the poor language, and it’s safe to say that the fan in question probably won’t be invited back on to deliver his verdict on matters at Man Utd in the future.

Nevertheless, it’s not something that can be ignored and it’s a viewpoint that many other Man Utd fans will share. However, this is perhaps the wrong way to go about it as it didn’t seem to do much good…

Big fan of someone calling in to MUTV and saying “get the f*cking glazers out”. The presenter and Paddy Crerand don’t know what to do with themselves! pic.twitter.com/O7KJeju7mU