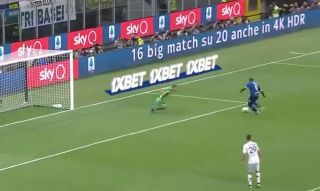 Romelu Lukaku wasted little time in opening his account for Inter as he scored on his debut against Lecce at the San Siro on Monday night.

As noted by BBC Sport, the Belgian striker made the switch from Manchester United in a £74m move this summer, and so the pressure was on for him repay the faith shown in him.

He didn’t disappoint coach Antonio Conte, as after looking threatening by using his movement and physicality throughout the game, he eventually got his goal.

As seen in the video below, Lukaku was involved in the build-up before being alert to the rebound and was on hand to tap home his first goal for the Nerazzurri to spark wild scenes of celebrations.

It was a comfortable start to the new Serie A season for Inter, with Lukaku’s goal the third on the night after efforts from Marcelo Brozovic and Stefano Sensi.

He gets a debut goal for Inter Milan, it had to be! ??#SerieA pic.twitter.com/XtojfCp8ug

debut goal for Lukaku. look how hyped they are for him. ???? pic.twitter.com/gibIi0EMET

Romelu Lukaku’s first goal for #Inter! The first of many. ?? #Lukaku pic.twitter.com/8JrqJV2Iyl