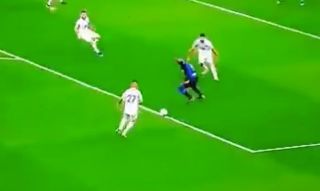 Romelu Lukaku scored on his Inter debut on Monday night, but these Man Utd fans still found a reason to troll him after his exit this summer.

The Belgian forward was heavily criticised for his poor first touch during his time at Old Trafford, and unfortunately for him, things don’t appear to have improved after moving to Italy.

As seen in the video below, Lukaku attempted to bring a pass under control but failed to do so as it was eventually cleared by the opposition.

He did have the last laugh though, as he bagged a goal on his debut in the second half to make it 3-0 on the night, with Antonio Conte’s side securing three points to start the new Serie A campaign.

It was an ideal start for Lukaku after finding the back of the net though, having wasted little time in opening his account for his new side.

Nice to see that Lukaku has found his first touch under the guidance of Sir Antonio Conte pic.twitter.com/YKgPvnAqDc

Lukaku scores on Inter debut. Yeah, you love him now lads but wait till he’s playing Juve or any half-decent team and his first touch lands in the car park ?? #mufc

Once a donkey, forever a donkey

Couldn’t even wait a game or two before putting on his clown shoes ?

You love to see it