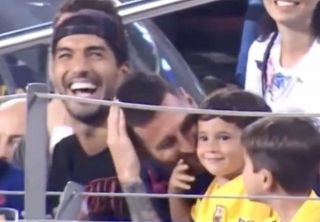 Lionel Messi’s son, Mateo, has been known to troll his dad in the past, and Luis Suarez couldn’t believe it during Barcelona’s win over Real Betis.

The Catalan giants ran out 5-2 winners at the Nou Camp on Sunday, with Suarez and Messi both ruled out through injury.

As the pair watched on from the stands, it has been widely claimed that the video below shows how Mateo decided to celebrate Betis’s first goal, much to the amazement of Suarez.

It’s unclear as to whether Mateo just misunderstood the situation or was genuinely trolling his dad, but Suarez was keen to correct him and let him know that it wasn’t the right time to celebrate.

However, it has also been suggested by some viewers that the video was actually taken when Carles Perez hit the side netting for the hosts and Mateo thought it was a goal, as it sounds as though that’s what the commentator is describing. Nevertheless, The Sun claim that it was at the time of Nabil Fekir’s opening goal.

Fortunately for all concerned Barcelona were able to bounce back from the early setback and secured their first win of the La Liga season after suffering defeat to Athletic Bilbao last weekend.