Pundit Danny Mills has gone for just two Arsenal players in his combined XI with Tottenham ahead of this weekend’s North London Derby.

The Gunners host Spurs at the Emirates Stadium having made the slightly better start to the new season, though it is Mauricio Pochettino’s side who have generally had the upper-hand in the last few years.

Arsenal used to finish above Tottenham every season but have now failed to do so since 2015/16, while Spurs have also reached the Champions League final since then.

Mills, however, is unsurprisingly taking a bit of a battering on Twitter after naming only Nicolas Pepe and Dani Ceballos alongside nine other Tottenham players in his line up, as revealed by the Sun. 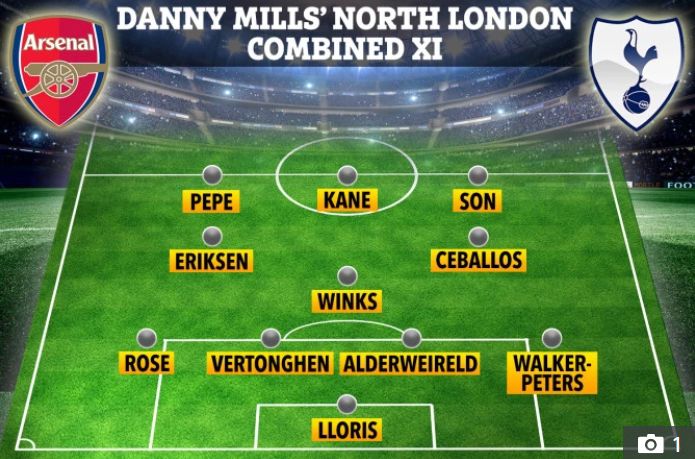 In fairness, it’s a close call with any other Arsenal players, even if there is an argument for getting Pierre-Emerick Aubameyang into that front three, perhaps over Son Heung-min, while Lucas Torreira is probably a decent shout to have over Harry Winks.

Kieran Tierney should, with time, be in over Danny Rose, but is yet to play for AFC due to having an injury when he arrived from Celtic this summer.

Here’s some bemused reaction to Mills’ line up…

How is Danny Mills a pundit ? A limited footballer with no sense of positional play in his hey day . Seems like he’s kept up that form.

Seriously! How is Danny Mills gonna leave out @Aubameyang7 but pick Pepe? No football fan in the land could justify that.#Arsenal #Gooners #SkySports https://t.co/8u2NxwpAT2

In place of Son, I'll go for a laca or Auba

Danny mills hasn’t got a clue. It’s not hard to predict that is it.

The real reason that Danny Mills is only including two Arsenal players in his North London combined XI. He’s hated us ever since. pic.twitter.com/bzc5vAaKez

Danny Mills hates Arsenal, so he can bog off