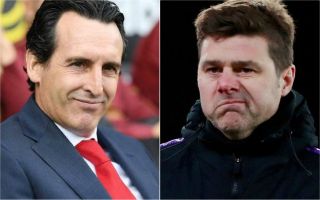 Arsenal are being backed to thrash rivals Tottenham by a scoreline like 4-1 when they meet in the North London Derby this Sunday.

The Gunners won their opening two games of the season against Newcastle and Burnley but then fell to a 3-1 defeat away to Liverpool at the weekend.

Arsenal don’t have the best record in games against the big six, but did enjoy a 4-2 win at home against Spurs when they met last season.

And speaking ahead of their next meeting, former AFC star Paul Merson believes Mauricio Pochettino’s side currently look in a pretty bad state.

Tottenham suffered a surprise home defeat to Newcastle on Sunday and haven’t looked particularly convincing for some time now, despite their run to the Champions League final last season.

"Arsenal to win comfortably, they'll rip Spurs to shreds. I will go 4-1" ?

There are also issues surrounding Christian Eriksen and Jan Vertonghen – two important players who continue to find themselves out of the Spurs starting XI.

With all this going on, Merson seems confident that should mean a comfortable victory for his old club at the Emirates Stadium this Sunday.

“I think Arsenal will win the game quite comfortably, 4-1. I think they will rip Tottenham to shreds,” Merson said on Sky Sports show The Debate, as quoted by the Daily Star.

“I think Spurs are struggling at the moment and if Arsenal get going then they could score a few.

“The Man City game has covered over the cracks at Spurs I think.”