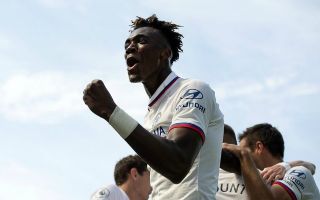 Chelsea striker Tammy Abraham has received some useful words of advice from pundit Jamie Redknapp, who wants to see him become more like Diego Costa.

The talented 21-year-old repaid Frank Lampard’s faith in him after a tough start to the season with two excellent goals in the 3-2 win over Norwich City at the weekend.

Of course, bigger tests will lie ahead for Abraham this season, but he’s shown he has the potential to be a top performer for Chelsea, given time.

Redknapp thinks the next step for the youngster is to add some nastiness to his game and put himself about more in the way Costa used to do so well for the Blues.

The Spaniard has proven a big loss since leaving Stamford Bridge for a return to Atletico Madrid, so Chelsea fans would surely love to see Abraham adopt those dark arts in the same way.

Still, if the England international just continues to put the ball in the back of the net CFC fans will no doubt be happy enough with him.

“Let’s give Frank Lampard credit for the way he secured his first Premier League win as a manager at Norwich,” Redknapp wrote in his column in the Daily Mail.

“There was pressure on his side to win but Lampard had the courage to start with Tammy Abraham up front and his bravery was rewarded as the 21-year-old got two goals.

“Abraham is not the finished article. I think he needs to be nastier and a master of the dark arts like Diego Costa. Then maybe the No 9 shirt will be his for the foreseeable future.”