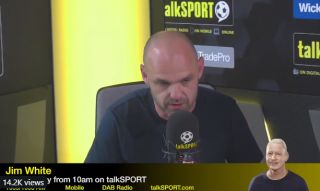 Former Liverpool star Danny Murphy has laid into Arsenal and manager Unai Emery in particular over the approach in their defeat at Anfield at the weekend.

The Gunners have a terrible recent record away to Liverpool and were on the losing side once again on Saturday as Jurgen Klopp’s men secured a fairly straightforward 3-1 victory.

Losing to this Liverpool team is no disgrace of course, but Murphy was distinctly unimpressed by Emery’s diamond formation and the team’s lack of game management on the pitch.

"#AFC will need a telescope to see #LFC by the end of the season." ?

"It looked like a system which had been put on a board and they hadn't worked on it."

See the video above from talkSPORT as Murphy gives an interesting analysis of the Gunners, whilst predicting they’ll be miles off their opponents by the end of the season.

“Arsenal will need a telescope to see Liverpool by the end of the season,” Murphy said.

“It was boys against men, it was too easy. Liverpool didn’t even get into proper gear!

“For parts in that first-half it was so easy for Liverpool. It was too easy to get into the final third because of Arsenal’s tactics and Unai Emery has to hold his hands up for that.

“If you go to Liverpool every year and get done, why not try something different?”