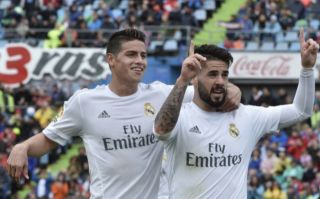 Napoli are reportedly still hopeful of signing James Rodriguez from Real Madrid before the transfer deadline, which would mean an exit for Simone Verdi.

The Partenopei got off to a winning start in the new Serie A season this past weekend, securing a thrilling 4-3 win over Fiorentina on Saturday.

Nevertheless, with reigning champions Juventus and Inter also picking up victories, it remains to be seen if Carlo Ancelotti looks to strengthen his squad further before the transfer deadline to ensure that his side can compete with their rivals this year.

According to Calciomercato, via the paper edition of Naples-based Corriere del Mezzogiorno, it has been suggested that the door is still open for Rodriguez to secure a move to Naples despite his recent injury blow.

It’s claimed that he could still depart if Real Madrid pursue another new signing of their own, while Verdi could then be offloaded by Napoli, albeit it remains to be seen if interested parties such as Torino, Fiorentina or Sampdoria are willing to meet his €20m price-tag, as per Calciomercato.

Ancelotti knows the Colombian playmaker well having worked with him at Real Madrid and Bayern Munich previously, with the 28-year-old seemingly still pushing for an exit despite being involved under Zinedine Zidane prior to his injury setback.

As reported by Sport, it’s suggested that agent Jorge Mendes has asked the Spanish giants to allow Rodriguez to leave, but they will surely wait for a suitable offer to be made and assess their options rather than simply allowing the former Monaco ace to move on.

Rodriguez would certainly add more quality and experience at the highest level than Verdi, and so it would come as no surprise if Napoli did push until the deadline to try and get a deal done.