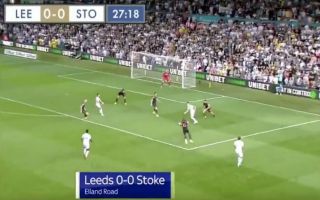 Arsenal forward Eddie Nketiah almost netted his third goal of the 2019-20 campaign in a Carabao Cup tie for Leeds on Tuesday night.

The 20-year-old, who is spending the season on loan at Elland Road, started tonight’s clash against Stoke City after impressing in his first few outings for Marcelo Bielsa’s side.

Nketiah scored in a 3-0 victory over Salford City in the first round of the competition and has already come agonisingly close to doubling his tally against the Potters.

The Arsenal loanee was inches away from scoring a wonder goal with a superb first-time strike in the 27th minute, which cannoned off the post and away from danger.

Leeds have since fallen 2-0 behind and have it all to do in the second half, but they could have been in control themselves had Nketiah’s effort ended up in the back of the net.

Check out the striker’s brilliant, curling shot below, via Twitter.