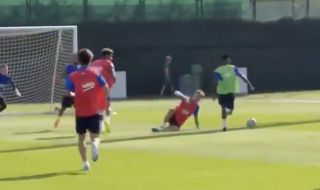 It’s been quite the week for Barcelona starlet Ansu Fati after coming on for his debut for the club during the 5-2 win over Real Betis at the weekend.

Still only 16 years of age, it will be a moment that lives long in the memory for the talented youngster, and he’ll be desperate to build on that moving forward.

Based on this clip, he’ll certainly be catching the eye of coach Ernesto Valverde, as he showed excellent speed and movement to leave experienced teammate Ivan Rakitic in a heap on the floor.

As seen in the video below, he wasn’t quite able to apply the finishing touch but he certainly created a buzz online with his bit of skill which Rakitic will hope to forget as soon as possible.

In contrast, it’s been a miserable start to the campaign for the Croatian stalwart having been benched by Valverde, and this likely won’t help improve his mood…

Barcelona dealt a huge blow with loss of this player to long-term injury November 7, 2020 21:21
FC Barcelona