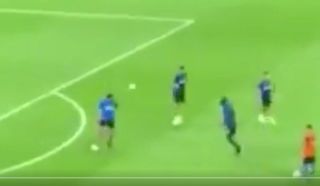 Romelu Lukaku wasted no time in getting off the mark as an Inter player after scoring in a 4-0 win over Lecce on Monday night.

The 26-year-old pounced on a rebound to tuck home his first goal for the club, their third on the night, as Antonio Conte’s men made a confident start to the new Serie A campaign.

SEE MORE: Two in, two out: Inter closing in on double signing, duo tipped to leave as Conte rebuild continues

For Lukaku though, he was seemingly in confident mood before kick-off as he bagged this stunning effort in the warm-up, as seen in his tweet below.

The Belgian international insisted that he knew he would score on his debut after producing such a quality finish before the encounter, and he didn’t disappoint as he made a positive impression on the Inter faithful in his first appearance.

Inter will hope to follow that up with a win over Cagliari this weekend ahead of the international break, and with fellow summer signing Stefano Sensi scoring on his debut too, morale will be high amongst the squad with Conte’s influence and additions having an immediate impact.

When i knew it was meant to be ???…. #Golaso pic.twitter.com/OmZAl5GUBl