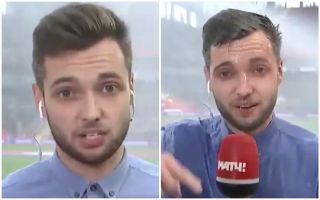 Most would have perhaps walked away and out of the line of fire, but not Evgeniy Evnevich as he took the full force of a sprinkler during a live broadcast.

It’s a minefield that reporters often have to navigate before games as while the ground staff are busy getting the pitch ready, they have a job to do on the sidelines.

Unfortunately for Evnevich, he was stood in the direct line of a sprinkler, but as seen in the video below, instead of shirking the responsibility of delivering his news report and running for cover, he finished his report as the sprinkler nailed him not once but twice.

He was sadly left drenched as a result, but that still didn’t seem to put him off as this is real dedication to the job and commitment to deliver news.

Next time though, he may want to leave a bit of a distance between himself and those pesky sprinklers…