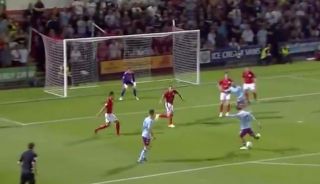 Aston Villa cruised into the third round of the Carabao Cup on Tuesday night with a 6-1 win over Crewe as Jack Grealish wrapped up the victory.

Goals from Ezri Konsa, Conor Hourihane (x2), Keinan Davis and Frederic Guilbert set the visitors on their way, before Ryan Wintle grabbed a consolation goal for the home side.

However, Grealish, who came on in the second half, added the icing on the cake with a late sixth and it came via a brilliant assist from Henri Lansbury.

As seen in the video below, the former Arsenal ace produced a delightful back heel pass to his teammate, and Grealish found the back of the net with a tidy finish.

Villa boss Dean Smith will hope that his side can start to build some momentum now having followed up their win over Everton on Friday with a comfortable victory in midweek.