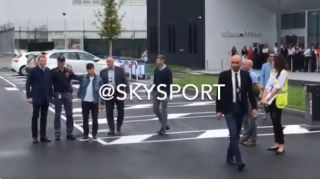 Manchester United flop Alexis Sanchez has been spotted waving to Inter Milan fans as they chant his name to welcome him ahead of his transfer to the San Siro.

The Chile international may have flopped big time in his spell at Man Utd, but was previously one of the best attacking players on the planet at Arsenal and Barcelona.

Inter fans certainly seem excited to see him, as the video above from Sky Sports in Italy shows them chanting his name to greet him.

This follows a tweet from Gianluca Di Marzio earlier today which stated Sanchez had arrived for his medical with the Nerazzuri.