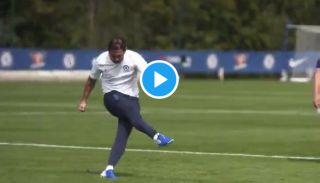 Chelsea manager Frank Lampard has showed he’s still got it with a superb strike past a hapless Willy Caballero in training.

Watch below as the Blues boss, who was one of the best midfielders in the world at his peak, fires a trademark finish past Caballero, who had no chance of stopping it.

Many nostalgic Chelsea fans will watch clips like this and no doubt pine for Lampard to return to playing, though he hung up his boots back in February 2017.

Lampard’s job now is to get Chelsea to continue to improve after landing his first win as CFC boss against Norwich City at the weekend.