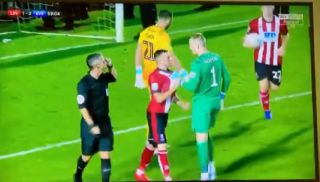 Everton goalkeeper Jordan Pickford grabbed an opponent’s shirt after running the length of the pitch to petulantly get involved in a scuffle at the other end.

Watch below as the England international gets into a heated row and grabs a player’s shirt in an aggressive manner that seems totally uncalled for.

This followed an on-pitch row after Everton took the lead against Lincoln in tonight’s Carabao Cup clash.

The home side went on to equalise and make it 2-2, though Alex Iwobi has since managed to restore the Toffees’ lead.