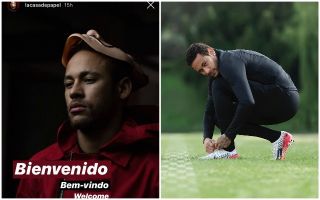 Paris Saint-Germain superstar Neymar has made his acting debut in hit Netflix show ‘La Casa De Papel’ – which in English and around the world is commonly known as ‘Money Heist’.

The Spanish series is focused around the biggest heist in recorded history.

Neymar appears in episodes 6 and 8 of the latest season as a monk. These scenes were only just re-added, according to AS, Neymar’s appearance in the show was briefly taken out following allegations of rape.

Money Heist is already massively successful, the fact that a global star of Neymar’s calibre has a cameo in the show – will only make the series even more popular.

In his cameo Neymar is seen wearing the trademark boiler suit alongside the Salvador Dali mask that has become synonymous with fans of the show.

Neymar is currently at the centre of the summer’s biggest transfer sage, the superstar has revealed his desire to leave Paris and La Liga giants Real Madrid and Barcelona are both keen on the attacker’s signature, as per AS.

Here’s Neymar dressed as a monk in the show:

Is this yet another hint that the 27-year-old wants to return to Spain?