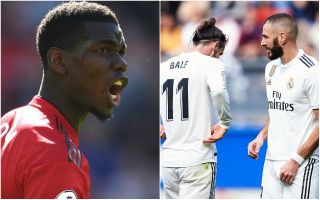 Real Madrid star Karim Benzema has reportedly been in touch with Manchester United midfielder Paul Pogba about his potential transfer to the Bernabeu this summer.

Marca have reported that Real remain keen on a potential late move for Pogba, even if it seems highly unlikely the Red Devils would sell one of their best players now, when they would have to wait until January to replace him.

Still, Benzema seems to be trying his best to persuade Pogba to push for a move as Don Balon claims he’s contacted his fellow Frenchman to advise him to submit a transfer request.

This might be the most realistic way for the 26-year-old to force Man Utd’s hand, though even then it would be such a huge risk for the club to let him go given the current state of their midfield.

Nemanja Matic and Fred have both fallen out of favour after poor performances, while Ander Herrera and Marouane Fellaini recently both left.

That leaves Scott McTominay and Andreas Pereira in that area of the pitch, or youngster James Garner as an absolute last resort.

It will be interesting to see, however, if Pogba is tempted to take Benzema’s advice and cause some drama before the September 2nd transfer deadline for La Liga clubs.