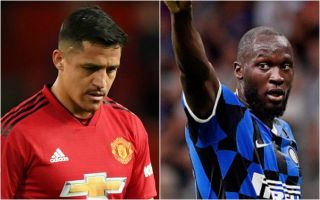 Inter Milan striker Romelu Lukaku has reportedly been having phone conversations with Alexis Sanchez to persuade him to leave Manchester United and join him at the San Siro.

The Belgium international recently left Man Utd to join Inter, and it’s now widely expected that Sanchez will be following him out of Old Trafford this summer.

The Chilean flop is closing in on a loan to the Serie A giants, according to Gianluca Di Marzio, and it seems Lukaku may have played his part in helping this deal happen.

According to the Daily Mail, Lukaku has been in regular contact with Sanchez to tell him how good life is in Milan.

In truth, many Red Devils fans may well see this as the best thing Lukaku has done for the club after a pretty poor spell in Manchester himself, even if he’s not been as bad as Sanchez.

The 30-year-old may well go down as one of the club’s worst ever signings, simply due to the big expectations that followed his arrival from Arsenal.

He has, quite simply, looked nothing like the player who lit up the Emirates Stadium and United will be delighted to have him off their books as soon as possible.