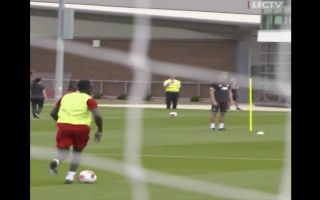 Liverpool attacker Sadio Mane scored a brilliant goal in training after taking the ball past two of his team-mates effortlessly.

The Reds are currently preparing for a trip to Burnley on Saturday, where they will be looking to extend their 100% start to the 2019-20 season.

Jurgen Klopp’s men have already recorded wins over Norwich, Southampton and Arsenal, while also securing more silverware in the form of the UEFA Super Cup after a penalty shootout triumph over Chelsea.

Mane has been one of Liverpool’s standout performers once again, with three goals and one assist to his name in four appearances, re-affirming his status as one of the Premier League’s most deadly forwards.

The Senegal international replicated that form in a training session on Wednesday, leaving Georginio Wijnaldum and Trent Alexander-Arnold for dead with his electrifying pace before producing an expert finish.

Sadio up to his usual tricks ?? pic.twitter.com/8c5LeSPCQh

How do you stop this? ?pic.twitter.com/D0LwH4RvZV