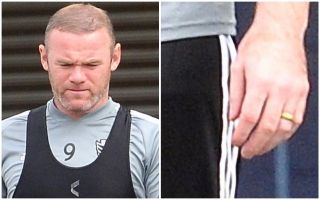 Wayne Rooney reportedly looked glum during DC United training but was spotted wearing his wedding ring amid an alleged row with wife Coleen.

Although Rooney has hit out at stories in the press about his private life, the Daily Mirror have continued to report on his situation in his marriage.

MORE: Wayne Rooney hits back at The Sun after cheating claims

See the Mirror‘s report here for pictures of Rooney still wearing his wedding ring despite the possible problems.

The Sun – Enough is enough pic.twitter.com/lCICTdwfwt

The former Manchester United and Everton star will be returning to English football for a player-coach role at Derby County.

It remains to be seen, however, if Rooney can put these issues behind him by then.