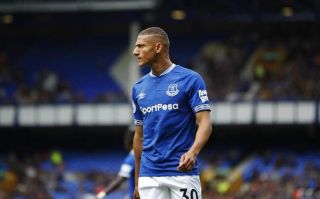 Everton secured a 4-2 win over Lincoln City in the Carabao Cup on Wednesday night, with Richarlison getting on the scoresheet for the visitors.

Marco Silva’s side will fancy their chances in the competition this season given the quality depth that they have in the squad, while it’s a trophy that they’ll want to win and will take their push seriously.

SEE MORE: ‘I don’t exclude anything’ – Transfer boost for Liverpool as £59m target leaves door open for a move

In turn, they will have been delighted to get past a potentially tricky trip to Lincoln, as they eventually ran out 4-2 winners and advanced to the next round.

However, it was Richarlison’s celebration after his goal that got these Liverpool fans talking, as they couldn’t help but troll him for what they interpreted as pulling out the Lionel Messi celebration at Lincoln in the League Cup after he famously did it against Real Madrid not so long ago.

The Brazilian ace probably has his own reasons for the celebration rather than trying to imitate the Argentine superstar, and ultimately he may well have been sending a message with it.

Nevertheless, that didn’t stop him from getting trolled, as seen in the tweets below, with many poking fun at him for perhaps going over the top given the game and opposition.

He probably won’t care too much as he scored and sealed a win for his side, but the comments below are hilarious in their own right…

Absolutely hilarious seeing richarlison celebrating like that against Lincoln of all teams ?? doing the Messi celebration with his number facing the wrong way, whoops. Made that game look like hard work yet there gonna win the cup ?????

Richarlison after sealing an unconvincing 4-2 win in the second round of the league cup against Lincoln pic.twitter.com/PokXfjsOAq

Haha that celebration by Richarlison is actually embarrassing ?

How have I seen Richarlison do the Messi shirt Celebration against ducking Lincoln in the 2nd round or whatever round it is of the CARABAO CUP ???????????????

Richarlison holding his shirt the wrong way round against Lincoln. Everton FC ladies and gentleman ? pic.twitter.com/sYj8Dho9Er

Why the fuck is Richarlison holding his finger to his lips after scoring against Lincoln..

Richarlison acting like he’s scored the winner in a big game, anyone want to tell him its Lincoln ffs??? pic.twitter.com/cXoFHbfZg6