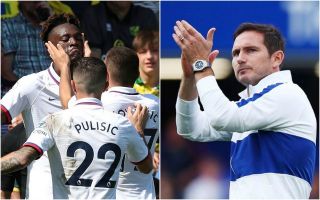 Chelsea manager Frank Lampard has been praised by pundit Paul Merson for his ‘masterstroke’ with Tammy Abraham in the win over Norwich City.

The Blues boss handed a start to his misfiring young striker, who took the opportunity with both hands as he netted an excellent brace in a 3-2 victory at Carrow Road.

Merson believes Lampard deserves credit for trusting Abraham in the first place, and sensing that this game against the newly-promoted side could be an opportunity for the 21-year-old to shine.

If this ends up boosting Abraham’s confidence in the long run, it could well be that Lampard got this decision spot on.

For now, however, it may be a tad knee-jerk to get too excited about Abraham as a top-level striker or Lampard as a top-level manager after a fairly close win over a Norwich side that the Chelsea of old would have expected to beat far more comfortably.

Still, Merson told Sky Sports he believes this will be a ‘massive’ moment.

“Tammy Abraham’s two goals at Norwich were massive for both Chelsea and the young lad,” the pundit said.

“You’ve got to give Frank Lampard credit for handing him a start at Carrow Road, he knows from experience that newly-promoted teams give chances away and gave Abraham the chance to punish them.

“In the current climate, if Abraham played and didn’t score that could have been that, with people starting to question whether he would ever score goals. But it proved to be a masterstroke.

“Yes, he will come up against better defenders this season but his double will have filled him with confidence and before you know it, he’ll be scoring week in, week out.”